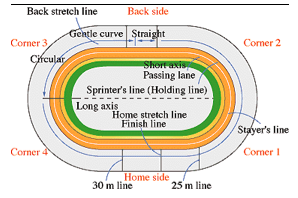 What is a Velodrome?

The oval tracks used for bicycle track racing are called velodromes. They can be found indoors or outdoors, and can be made of wood, concrete, asphalt, or cement, and, occasionally, grass or dirt. Velodromes are usually 333.3 meters around, although they can run as long as 500 meters or more, or as short as 200m, or in the case of some of the "portable" tracks, even less. All velodromes have two long sections called "straights," which are linked by two curved end sections, giving the track a total of four turns. Bicycle track races are always run in a counter-clockwise direction, so all four of the turns are to the left.

The turns on a velodrome are usually "banked," or constructed at an angle, and the banking on some of the shorter tracks can reach such incredible angles that it would seem impossible for anyone to ride a bike on them. The centrifugal force generated by the riders' speed, however, usually keeps them firmly glued to the track's surface no matter how steep the banking may be. The area inside the track is called the "infield," and is used as a warm-up area for riders and as a seating area for competitors and coaches.

Encircling the infield, just at the edge of the track itself, is a flat, paved surface called the "apron." This can be used as a warm-up area, as a place for mounting your bike, or as a run-off area for coming off the track in case of an accident. Several lines are painted on the track and run around the full oval. The line, usually black, at the bottom of the track, nearest to the infield, is called the "pole line," and is the line along which the length of the track is measured.

Some seventy centimeters up the track from the pole line is painted another line, usually red, called the "sprinter's line." The area between these two lines is called "the pole," and is involved in the rules for a very popular event called the "Match Sprint." About halfway up the track is another line, called the "stayer's line," which is usually blue, and is used in team racing and in motorpaced events as well.

Due to its early origins, a track bike's composition goes back to the original form of the bicycle: not much more than wheels, frame and pedals. It does not have any breaks or derailleurs and has only one fixed gear, meaning, that you cannot coast while riding. 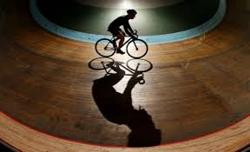 Riding safely should be the rider’s first priority. Track riders should try to be polite, friendly and always aware of others. Here are some common rules and advice to keep in mind while riding on the track:

The faster rider is responsible for passing safely.

Never get out of the way of a faster rider. Maintain a straight line.

Except for entering the track from the apron, the area from the pole to the lower stayers line is reserved for fast riding.

Use the area between the stayers lines for slow (or recovery) speeds.

From the top stayers line to the top of the track is reserved as an emergency lane for riders accelerating or doing flying starts.

Generally, only in a pace line should four or more riders ride together. At all other times, riders should be in groups of 4 or less, including speed efforts.

Turn your head in the direction you want to move, and glance back as you gradually move up or down the track, paying attention to where you’re going and over-taking traffic at the same time. Do not rely wholly on your peripheral vision.

As you approach a slower rider with their heads turned in the direction you want to pass, sound-off with the command "STICK" in order to keep the slower rider from moving into your passing lane.

If you are going to practice standing starts with someone, ask permission from everyone at the track. Obviously, this is not recommended during busy times.

Keep all bicycles off of the outer edge bars/ropes. Do not hook the handlebars on the bars/ropes. This creates a dangerous situation.

Never cross the track while a race is in progress. Wait until the race has ended. Always look before crossing the track, as slower riders may still be finishing a race.

Scratch Race:   The traditional type of bike race over a pre-determined number of laps. The first one across the line wins.

Unknown Distance:      A scratch race with the bell ringer being the only one who knows how long the race is. The bell ringer decides how many laps the race will be before the start but doesn't tell the riders. Maximum 10 laps.

Points Race:     This event involves a number of mini-races within the main race. When the bell rings racers sprint to finish in the top 4 places on that lap and win points (5-3-2-1) to count to the overall race total. Rider with the most points wins. 20 point bonus to any rider who laps the main pack (the largest group on the track), 20 point deduction for any rider who is lapped by the main pack.

Avalanche:       A points race which has the number of points awarded for each sprint increase throughout the race. Win the first sprint and you earn 1 pt. win the last sprint and you get 5 pts, points down to fourth place.

Point-A-Lap:     Like a points race except there is a sprint every lap and there is only one point up for grabs each lap.

Elimination:     Also called Miss and Out or Devil, as in devil take the hindmost. This is an elimination race with the last rider on every lap being removed from the race. Once there are only three riders left they sprint it out for the finish.

Win and Out:    A five lap race with the winner of lap one taking first place and       getting to retire from the race. Winner of lap two earns second place and pulls out etc.

Reverse Win and Out:   A five lap race with fifth place going to the lap one winner, fourth to the lap two winner, etc. Pack must keep up with a pacer riding on the apron.

Keirin:              A group of riders pace around the track for about four laps behind a motorcycle. With just over one lap to go the pacer pulls off of the track and the riders sprint for the finish. For Group C, the Keirin is bicycle paced, rather than motorcycle.

Chariot Race:   A neck-to-neck one-lap race from a standing start. May, at the discretion of the night's organizer, be handicapped for obvious differences in ability.

Flying 400:       Each rider will have one lap to reach maximum speed, then try to maintain for a second, timed lap. There will be two riders on the track at once - one doing their build up lap on the upper track, one their flying lap on the black line.

Winners:          Sprints every 3 laps. A rider who has won a sprint stays with the pack but does not contest further sprints until the final. After the sprint with 3 laps to go, all riders except those who have won sprints leave the track. Remaining four riders contest the final sprint.

Madison:          A points race with teams of two, one riding with the field, the other recovering. Points normally every ten laps. No bonus for lapping the field but team placement is a combination of laps completed plus points. A team that has completed the entire distance and has 10 points will finish ahead of a team that is one lap behind with 25 points.

Individual Pursuit:       Timed event with two riders on the track at once. Elite men/A 4,000 metres, Elite women/masters men A and B/junior men/B 3,000 metres, Masters C and D men/Junior and masters women/U17 men and women 2,000 metres. If there is both a qualifying and final round, a rider caught in the final is eliminated and the race ends. In qualifying races, a caught rider finishes the distance.

Team Sprint:    Three riders (two for women) with the lead rider peeling off at the end of each lap.

UCI Omnium:   200 metre TT, 12 lap scratch, 3 km pursuit, 48 lap points (6 sprints, including final). Kilo TT. Winner based on lowest overall score where in each event first gets 1 point, second 2, etc. Must finish each event to start the next event. Race distances shorter (except 200m) for categories below A.

Australium Pursuit:      A Hammerfest favourite. Riders start at equidistant intervals around the track. Any rider who is caught is eliminated. May be terminated early if field down to two placed opposite one another on the track.

Team Points Race:       All riders are put in teams of 4 or 5. Teams with the most points wins. The organizer selects the teams so that they should be even.